The Dagley Family and their Hangin Tree Cowdogs 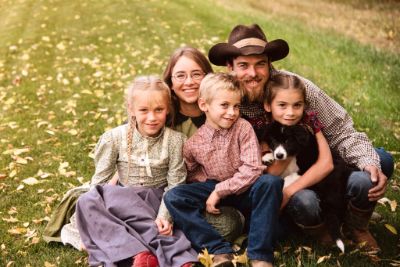 The Dagley family manage a working cattle ranch in South Dakota. And their Hangin Tree Cowdogs play an important part.

The Dagley family use rotational grazing to improve the soil. So, the cattle are in an area for a week or two. Then the Dagleys use their Hangin Tree Cowdogs to move the cattle to fresh pasture. This allows the land to rest most of the year. Which improves the soil and encourages the growth of native grasses.

But David Dagley not only trains dogs, he also uses the dogs to train the cattle. The cattle know that when David and the dogs show up, they get fresh pasture. So, the cattle respond really well to the David and our dogs, and trust David as their leader.

The Dagley family also use our dogs throughout the year to bring the cattle to feed, bring them to the corral to work them, show them where the water is in a new pasture, where there is shelter during a winter storm, or to load the cattle into a trailer.

Working the cattle, the way they do, is peaceful and low stress.

The Dagleys still use horses when ever they can, but the dogs fit in with their everyday ranch work easier. Because a cowdog can just jump into the pickup if they are taking out a load of feed. And, cowdogs can ride on the four-wheeler or in the tractor, or go along when they are building or taking down a fence. (which they do often, because they use a lot of temporary fences due to the rotational grazing)

And their dogs aren’t your ordinary farm dogs. They are Hangin Tree Cowdogs, which are bred to be an all around cattle dog. They can gather the cattle, bring them to you, and also drive cattle. So, David usually rides his horse (four-wheeler, pickup, etc) along ahead of the cattle, showing them where to go. While our dogs bring the cattle on behind him.

Hangin Tree Cowdogs are a very intelligent breed. David has trained their cowdogs to understand voice and whistle commands. Such as “Come-By” (Clockwise), “Away to me” (counter-clockwise), “There” (stop, and be ready for the next command), “Down” (lie down),and “Walk up” (walk towards the cattle), etc.

A Quick Description of what a Hangin Tree Cowdog is

One of the requirements to register a Hangin Tree Cowdog is that it must trace back to Gary Ericsson’s original dogs.

You can learn more about the Hangin Tree Cowdog breed and how to register here:
https://dagleyranch.com/what-is-a-hangin-tree-cowdog

“In order to Supreme Qualify your registered Hanging Tree cowdog, you must use your dogs to bring five or more dog-broke yearlings through an obstacle course in front of the judges. The handler must stay in a 30’ circle. They sends their dog over a hill to gather yearlings that the dog did not know were there. Using voice commands, the handler directs the dog to guide the cattle around a couple obstacles in a figure eight or “S” curve pattern, then away from the handler and into a pen. Then you must be able to call the dog off the cattle and have it come to you.”

By encouraging you to Supreme Qualify your dog before you breed it, it ensures that the Hangin Tree Cowdog breed will not only be tough, but be trainable, amazing, cowdogs for generations to come.

Back to the Story
The Dagley family was able to take one of their Hangin Tree Cowdogs, Dagley’s Annie, to Texas last fall. Annie not only Supreme Qualified, but David and Annie also competed in the Novice class at the 2018 Hangin’ Tree Cowdog Futurity, and carried away the Novice Champion belt buckle.

This past November, David Dagley had an accident while working in the shop and got a piece of metal in his eye. He spent the winter going through surgeries to remove the damaged lens, reattach the Retina, etc. During that time, he was not allowed to ride his horse, or even ride a four-wheeler across bumpy pastures.

His dogs made it so he could still move the cattle, slowly walking or driving ahead in a pickup, while Spur and Annie gathered the cattle and brought them on behind. The Dagley family is very thankful to God, and all the skilled doctors who worked on David’s eye. It is slowly healing. The doctors plan to eventually put in an implant lens, so he can use his eye again. But it was another case where their dogs proved their worth.

The Dagley family loves being out in God’s beautiful creation with their horses, dogs, and cattle.

They feel that God has truly blessed them.

Be the First to Know When We Have a Cowdog Available!

Get Dagley Ranch News, free dog training videos and tips, and learn about opportunities to add a cowdog to your spread.

​FREE GUIDE - How To Get Started With Cowdogs!

GET YOUR FREE GUIDE NOW!